This might be a weird thing to rant about, but can I tell you how much I hate bathroom stalls? I mean, HATE.

Listen y'all, I'm a big girl. Thankfully not as big as I once was, but still way bigger than a lot of people. One of the most disgusting things about being big? Having to go into a bathroom stall that is about as wide as my hips. In completely random Skinny Emmie fashion, here are my gripes:

Someone please tell me I'm not the only crazy person who has these problems!?

I am the fat kid in Georgia

Kirstie Alley is Not a Size 4

← Fatshionista?
Not the biggest? → 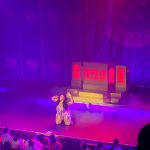 
"Do you even know how huge a 4X is? Do bigger size

Happy Derby Day! Here are some throwbacks from 201

Happy weekend! This *may* be the 4th color of the