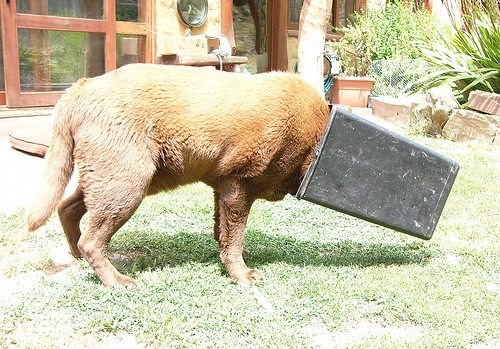 Less than 12 hours from now, hundreds of people will be finishing a race.

Some will be super fast and others not-so-fast, but they will all finish.

One year ago, I finished the race. I worked hard, persevered, and was DAMN proud of finishing.

I wasn't fast, it wasn't without pain, and I certainly didn't do it alone.

Tomorrow is the RunTheBluegrass half marathon, and I've been a complete ostrich with my head in the sand. Or like a dog with a bucket on its head.

Here's the problem when you go around with a bucket on your head:

Perhaps no one is laughing at me right now, but I am feeling like an ass. I have friends doing RunTheBluegrass. I've been in “la-la-woe-is-me” mode with extreme frustration over my ankle problem and feeling stuck in general. At one point I thought I'd work at a water station or volunteer in some way. Then I realized a) I would be a sad panda because I would watch everyone and their healthy bodies run past; b) my foot actually won't let me stand on it for that long.

Instead of being a cheerleader who is holding puffy-paint posters with glitter, I'm going to be doing something random at home, like washing the dishes or doing laundry.

I've been in a complete funk the last several days as soon as I realized the race was coming up so soon. Even if I were completely healed, I'm not sure I would have done it. That being said, I know I wouldn't sit here with a bucket on my head. I feel bloated from eating crap, and I've realized that instead of beating my bucket-head against the wall that I should take it off and use it as a reminder of why I'm doing this fitness journey. I have to keep pushing forward in order to do the things in life I want to. Like do another half-marathon. Or at least have the option.

Good luck to Krissie, Lydia, Holli, and other LexRunLadies. You all inspire me and I look foward to being able to rejoin you.