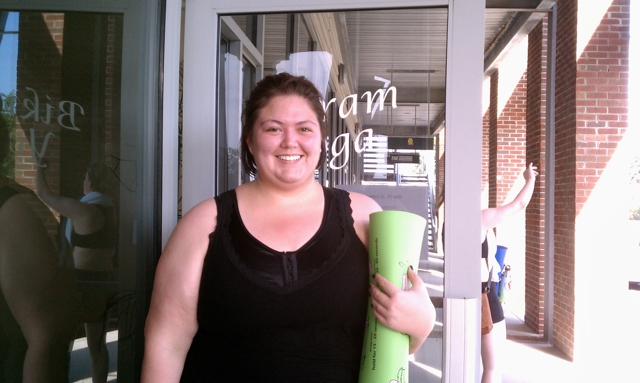 Last week, Bikram Yoga Lexington had a Groupon. They had a different Groupon about 3 months ago and I was kicking myself for not getting it. Needless to say, I snatched 2 of these up. I am now the owner of 20 Bikram yoga classes. Guess I should use them, right?

For those who aren't familiar with it:

Bikram Yoga is a system of yoga that Bikram Choudhury synthesized from traditional yoga techniques and popularized beginning in the early 1970s.[1][2] Bikram's classes run exactly 90 minutes and consist of a set series of 26 postures and 2 breathing exercises. Bikram Yoga is ideally practiced in a room heated to 105°F (≈ 40.6°C) with a humidity of 40%, causing it to be categorized as a form of hot yoga. (via Wikipedia)

I was scared. Would I pass out? Get dizzy?  Thankfully, Krissie has been doing Bikram for a little bit and she was there as a security blanket for me on my first session, which was earlier today.

Holy balls it is hot!

I mean, I knew it would be hot, but WOW. At first, it wasn't that bad – I do live in the south with heat and humidity. Once we got into the poses, however, WOW. Sweat everywhere. Dripping from every inch of my body. At first, it felt good. When my clothes, mat towel and hand towel were completely drenched, it started to feel icky.

For the most part, the poses aren't difficult, and you can always modify or lay down if you can't do it or get dizzy. It isn't looked down upon at all to just lay down throughout some of the poses if needed. You are told to look at yourself in the mirror the whole time, and to focus on yourself. The instruction through all of the poses is the same for every class, so once you get over the hurdle of the first one, you know what to expect for all the others. I was told upon sign-in that as long as I stay in the room the entire 90 minutes, it would be a success. Thankfully, I made it through and didn't get dizzy during it. I did lay down for several of the poses, and it was totally fine.

When you go to the studio, take a yoga mat, large towel (to put on top of your mat), hand towel (to wipe your hands/body) and water. I thought it was just silly that people in yoga classes don't seem to wear any clothes, but I quickly learned this is for function – not vanity. My tank top and capris were soaked in no time, and they got heavy and sticky. I'll need to look for shorts and poly-blend tanks so I am not quite so uncomfortable. Everyone there was really friendly, and I wasn't self consious at all once the class started.

Here's me after the class:

My clothes and hair looked like I just jumped in the pool. Oh, and hello ENELL SPORT bra.

I'm heading to another Bikram class tomorrow morning. It feels good to try new things, and to put my body in situations it hasn't been in before. 340-something-pound fat-but-fit girl doing Bikram yoga? That's me!

Have you ever tried Bikram or any other form of hot yoga? What were your thoughts? Is this something you think you would want to try?