I'd been on my computer working for an insane amount of time. My dog wanted to go outside and I thought it would be a good idea to join her. I laid back in a lounge chair on my deck and started counting stars. 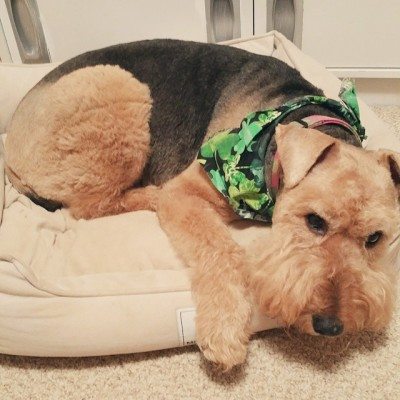 (Gratuitous photo of my dog, Lilly. She gives me side-eye every time I take a photo.)

But even before I started counting stars, I tried to get a photo of the stars on my phone. Because it didn't happen if I didn't take a picture for Instagram, right??? (Insert sarcasm and eyeroll emoji.) With the screen in front of me, I wasn't focusing on the stars. So I called out my bullshit and turned the phone off. Then I saw the shooting star.

I rushed to think of a wish. Because obvs, that's what you do when you see a shooting star, right? But I couldn't think of one. I just blurted in my mind: “I wish for me to get my shit figured out!” Which, to be honest, is like someone asking for unlimited wishes as wish #1 to a Genie who gives them 3 wishes. #cheater

This past week, I've been grieving. I am not a huge fan of the word “grief” because it sounds so traumatic. But in ways, it really is. I wrote about the death of my mom, then 2 days later it was my birthday.

I used to LOVE April because it was springtime, Keeneland (horse races here) started, it was the dating anniversary with my hubs, and it was my birthday. Superfecta of awesome! But since my mom died 2 days before my birthday and was buried 2 days after my birthday, it threw a wrench into the self-absorbed celebration that surrounded my birthday previously.

This year, I also was grieving the loss of my marriage, which I thought I was totally healed from now. But I'm not. All of these “firsts” – first anniversary, first Christmas, first birthday, first day we met —- post-divorce — is like poking at a wound that you thought for certain was nearly healed.

Over the weekend, I went to Nashville to go to a Mat Kearney concert at the Ryman. I always wanted to see a show at the Ryman, and I like Mat Kearney's music so when I saw he was playing the night before my birthday, I grabbed tickets before they sold out. I had an AMAZING dinner (best steak EVER) with my friend Emily and her 2 friends (we're all going to Mexico together – woot!) and then I obsessively watched my ESPN app during the concert until Kentucky lost to Wisconsin in the Final 4. Sad trombone. I nearly canceled my trip to watch them play, but thankfully I didn't. The concert was good, but I hadn't ever been to a concert so quiet before. It was eerie. Not sure if it's because the Ryman is tiny or because the audience had a wide range of ages or because a lot of the audience was friends with adopted hometown boy Mat Kearney. In any case, weird. But good.

Emily so graciously hosted me, and I kept her up into the wee hours of the morning gabbing about a bunch of stuff that doesn't really mean anything, but she was an outlet. The next morning (my birthday), we went to brunch with another friend – Dani – and that was awesome also. Noms and awesome people is always a winning combo.

At one point during our conversation on the way back to her apartment, Emily asked “How are you so well-adjusted?” I had been yammering on about my family and mom dying and all the awesome that comes with that. I laughed, because I'm not. I just hide it well.

As I drove home, I listened to the Invisibilia podcast (seriously, it's SO GOOD) and the closer I got to home, the more teary I got. Each story tugged me more and more, but it all got more severe when I got closer to home. When I got inside my house and put my bag in the laundry room, I just lost.my.shit.

I came home to a silent house. Not even the dog was back home yet. No one related to me had wished me a happy birthday, and that just punched me in the gut. Not that it was any different from normal. This is an annual event – the lack of acknowledgement. But to not have my ex, or even the dumb Easter basket the Easter bunny left at our door. It left me playing that awesome game: What is wrong with me?

What is wrong with me that I can have random people on the internet wishing me a happy birthday (so appreciated), but not my own family?

I didn't fall to my knees crying on the bathroom floor (thank goodness) but it was the closest I've been since the recent months after my divorce. “Scandal” provided a good distraction, and then when my dog returned home that also helped. Again, the family thing is what it is. This happens every holiday or birthday. The different this year was not having that person who had stepped in to fill their void. It was grief.

Relationships are hard. Not just romantic ones, but friends. I have friends, but it just felt that day that I didn't. It's a perception issue, not reality.

So maybe for this shooting star, I should have wished for no more grief. Clearer perception of reality.

My dog Lilly started barking, so I was snapped out of my contemplative state. We went inside, and a song came to mind that I loved years back. It is by an artist I followed really heavily back in the late 90s and early 2000s: Edwin McCain (best known for his ballad, “I'll Be”.) I searched for the song, and as I listened and remembered all the lyrics, I cried. This time though, the tears weren't from grief. They were grateful tears of being able to receive the message of perception versus reality.

Maybe my wish on the shooting star already came true.

If you had to decide right this second, what would you wish for?

Working on my (mental) fitness

Plus Size Outfits of the Week

← You Begin to Forget
Twirling in SimplyBe →


Ditching perfectionism to show you a simple way to