This post should probably be titled “holy cow, Emmie is blogging about cooking” because that's how rare it is.

The moment I got off the plane in Baltimore for FitBloggin‘, I headed straight to an event that was being hosted by McCormick. When I arrived to the McCormick Testing and Innovation Center, I got to see many of my FitBloggin friends heading off the busses and into the center for the event as well. We were treated to an amazingly tasty lunch (as if I expected any less from people who understand flavor), and then we got to attend several interactive sessions about senses, flavors, and even cooking demos. I really was not comfortable with spices before. My pantry held sea salt, pepper, garlic powder, onion powder, and cinnamon. That's about it! I never knew what to do with the other stuff, and it meant I prepared really boring food. I was at a point where if I had to eat another boring piece of chicken or fish I might go crazy. It all became so unappealing.

I got to bring home a massive amount of spices from McCormick after FitBloggin, and I became inspired to break the out last week to make some chicken thighs. It was my first spice experiment, and it was ridiculously delicious. I marinated the skinless, boneless chicken thighs in a mixture of spicy brown mustard, crushed red pepper, garlic powder, ground ginger, and a little bit of local honey.

I let it marinate about 2 hours, and then just baked the chicken at 375 degrees fahrenheit for about 20 minutes. So flavorful! It definitley broke my chicken rut.

Tonight, I got a little more adventurous, and chose salmon as my protein. On a whim, I bought some acorn squash last week, so decided to try that for the first time as well. This is about as crazy as I get, people! 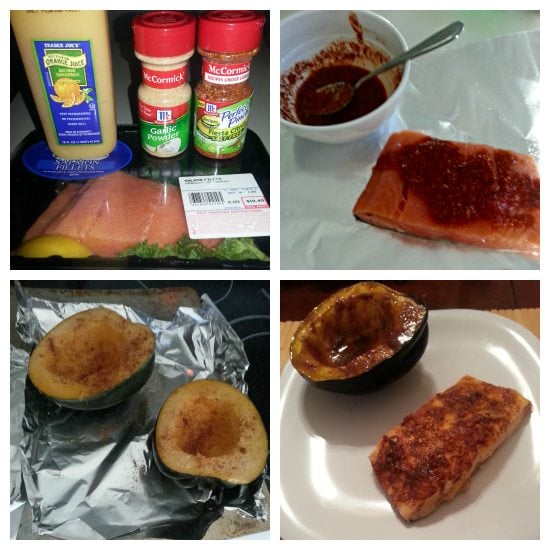 For the acorn squash, I just split it and took the seeds out. I then sprinkled a tiny bit of sea salt on it, and then McCormick Saigon Cinnamon and Ground Ginger. I baked it with the salmon at 400 degrees for 30 minutes. I checked it every 5 minutes or so to see if it was fork-tender. When I pulled it out (it was about 10 minutes later than the salmon), I used the fork to poke holes through the flesh and rubbed it with a small sliver of butter (about 1tsp. for both halves) then drizzled a little pure maple syrup and sprinkled more cinnamon and ginger. Nom.

A note about the salmon:

At McCormick, they taught us about layering flavors. In one example, they marinated a chicken breast, then added a dry rub before cooking, and finally topped it with a salsa. 3 layers of flavor! The salmon was insanely delicious as is, but if you want to layer flavor with it, you could add a simple citrus relish to it. Maybe some chopped orange, cilantro, lime zest, garlic, and chopped onion? I'm going to try that next time.

I'm really thankful for this event because I learned so much. I am not the most savvy person in the kitchen, so anything that makes me excited about cooking flavorful, healthy food is really rare. If you want to see some of the recipes we learned at FitBloggin, you can check out the McCormick site www.spicesforhealth.com or follow them at @spices4health on Twitter or under the hashtag #genfresh.

Do you have any favorite spice combos that you use to cook with? I want more ideas!

← No biggie
OOTD: Sequins and prints and horses! →