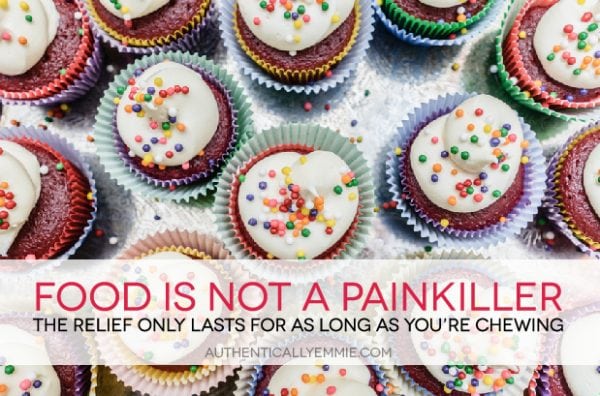 Something totally unexpected that has happened since my ankle surgery nearly 3 weeks ago: I had a “smack me in the face” type of moment about my long-troubled relationship with food.

You know how there are things that you know, logically – and then things happen that make you really pull the blindfold off to be able to SEE that knowledge? This happened to me last weekend when I did something ridiculously stupid – trying to take a shower on 1 leg. As I wrote last week, this resulted in me falling down in the shower while my hubs was walking the pup, and having to somehow get out of there (it's a small sliding door to get out), get back up on my 1 good leg, and get into the bed to pull the weight off both legs which were in a lot of pain. In the process I ripped off the shower handles which resulted in us having 36 hours without water in our house during the repair. That's a whole ‘nother story though.

When I somehow made it back into the bed, I was in shock. Did I tear my tendon again since I fell on it? Why was my head hurting? Did I hit it? I scratched my good leg, but it wasn't bad. Then the thought hit me:

Not just any food. I wanted ice cream. Or french fries. Or both. Things that would make me *feel* better.

As a former binge eater, I wasn't trying to use food as a remedy for physical pain – I was trying to fix emotional pain. If I could still eat more and more and more, I wouldn't be able to think or feel anything I was trying to escape. The more time I could spend chewing, the more time I could avoid feeling pain. This meant first buying enough food to get me through that time period, and then consuming the mass quantity mindlessly and in solitude. Being alone let me remove any sense of shame I would feel if I had done this activity in public. I knew it was wrong – I knew it was something that should cause shame. Yet I repeated it time and time again, hoping that perhaps one time the feeling would stick.

Of course it never stuck. It made things worse. But until you can actually recognize yourself engaging in that behavior, it's so incredibly difficult to pull out of the cycle.

Thankfully I didn't do anything to harm my ankle other than get the splint wet. My back was sore for a couple of days, but nothing was wrong. I learned my lesson to be patient, ask for help, and not take a shower on 1 leg. More importantly, I recognized that I had the ability to see the strong pull towards food as a way to mask the pain. I knew it was wrong, and I knew it wouldn't work. It never works. Experience has taught me that.

I am thankful for the moment of clarity that allowed me to stop the destructive behavior before it happened.

It’s Not a Resolution